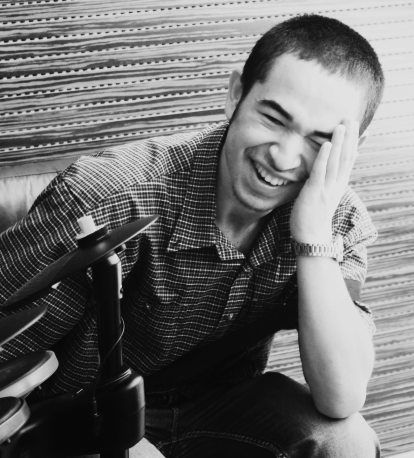 That evening, after spending some time at Medeu, I found myself stranded in a cafe—eating some cheeseburgers and sipping Georgia wine with Zhamilya, Alex, Jim, and Sean. Suddenly Alex asked, “Hanny, is it just you—or Indonesians are all very happy people?” I have heard this kind of comment quite often since my very first day in Almaty. People were asking why I was always smiling and laughing. I didn’t realize it, really. And I didn’t realize that people actually notice. I’d like to take that as a compliment, and I’d like to say that I think, Indonesians are a bunch of naturally happy and friendly people. Aren’t we? 🙂

And what about the Kazakhs? Though they might not be the forever-smiling kind of people (I think it’s more about how people with different cultures express themselves in different ways), I found their hospitality and sincere friendship heartwarming. Some students who volunteered at TFCA 2012 didn’t hesitate to strike a conversation and ask questions. They’re so enthusiastic and curious. They want to connect. I found this attitude very amusing.

One of them is Bota Ilyas (her name means “camel eyes”). She volunteered as my translator for TFCA 2012 event, and we connected so well that we spent the rest of my Almaty days together.

Bota taught me Russian: ya svobodna, ya kachu parnya (I’m free, I want a boyfriend). And I taught her (and her friend Madina) Indonesian. Cowok cakep means handsome guy, I told them. The girls giggled. They said they wanted to say this phrase aloud when they spotted some handsome guys. “They wouldn’t know what it means!” the girls giggled again. Of course, when three girls spent some time together, sooner or later, they would be talking about relationship: love and guys. Bota is also very pretty—as I laid my eyes on her for the first time, I knew that she would look great in front of the camera. On my last day in Almaty, we spent half a day to do a photo session together. It was fun!

Ulan Scheff and her sister Zika Gabdusheva took me to the Museum of Arts for the French painting exhibition and accompanied me to walk around Almaty one day. Later on, I found out that they live 1 hour away from Almaty and needed to catch a bus before 9 pm. They actually came to Almaty just to go to the museum and spend that day with me. I couldn’t be more touched. Timur (Tima) Azizov was volunteering for TFCA 2012 as well (girls, he’s still in high school, he plays piano and basketball, and he doesn’t drink). On my last day in Almaty, Bota, Ulan, Tima, and myself went to Omega Sector—the game center for teens in Almaty, and tried our luck playing Guitar Hero. None of us had played Guitar Hero before, and… well, we felt bad for everyone in the game center who were forced to hear us play 😀 But anyway, we could finish one song that day, and it was quite an achievement! I felt young in Almaty, thanks to spending my time with a bunch of high school and university students! *love*

Apart from my new Kazakh friends, I met some awesome speakers of TFCA 2012 as well. They are a great bunch. I missed them much when they left Almaty. Two of them left something behind for me: a book and a strip of paracetamol.

Jim Williams who is now back in Islamabad, Pakistan, gave me his Lonely Planet Central Asia book. “Why? Don’t you need this?” I asked. “No worries. I can get one again,” he said, handed out the book. Maybe it was a sign for me to pack up my bag and do my Central Asia tour next year? Sean Knox is my saviour in Almaty—the one who brought me some paracetamol from the pharmacy when I was down with high fever.

“I got loads of mentions in Twitter from Indonesian teens,” Sean laughed. He showed me his Twitter stream; with his Twitter handle @smk. “SMK in Indonesia is like… what? A kind of school? Indonesian teenagers keep checking in or posting stuff saying that they’re in SMK this and SMK that, mentioning me!”

Sean got me for the first time when he told me about how he had sold everything that he once had; and decided to backpack all over the world. It takes a lot of courage to do that, I believe. To leave everything behind and pack all your life in a cabin bag. Which may not be a bad option. After all, we only live once. And I am pondering over the idea at the moment.

“How did it happen?” I asked. “Have you planned this for a long time, or was it just an impulse?”

“I attended a travelers’ gathering one day,” Sean answered. “I met people who have backpacked all around the world for months, even years. And then it hit me: if they could do this, I could do this, too. And so, I left.” Now Sean is traveling across South East Asia. Last seen in Koh Tao, Thailand. From my previous traveling journeys, I realized that the places I cherish the most are places with names and faces; places where stories and dreams are being shared with someone you have just met for the very first time; places where you arrive as a stranger and depart as a dear friend | @beradadisini