How We Say Goodbye When Summer Ends 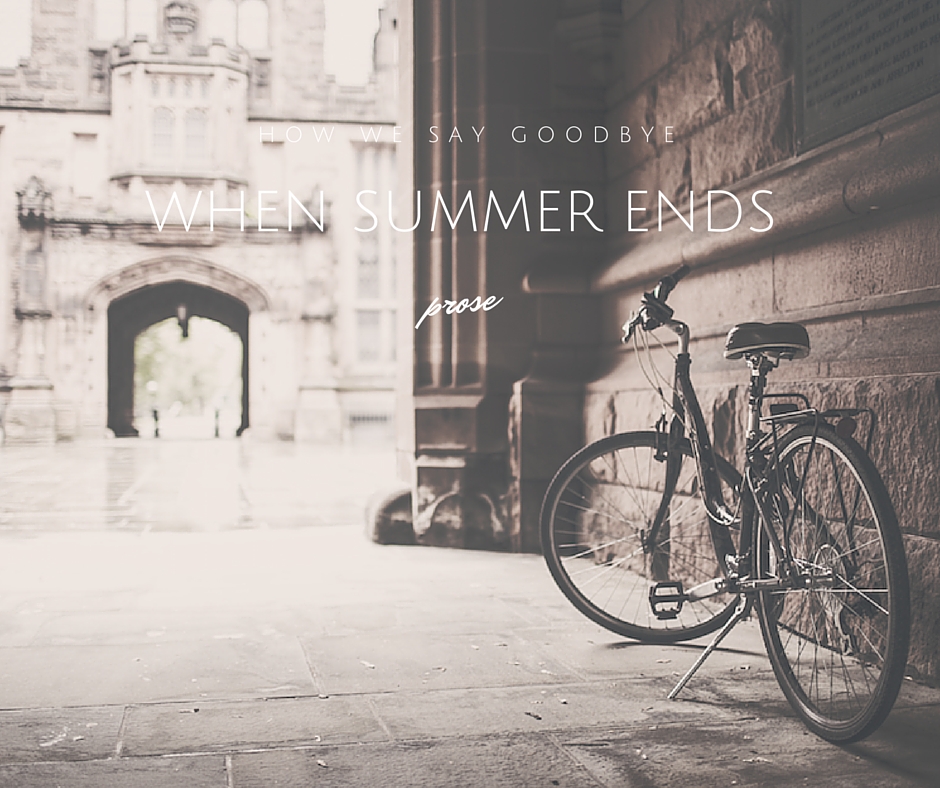 Our retrouvailles marked the end of summer in your city. The city I came to love despite its constant windy chills and random rain showers: in summer.

We remembered the couch—with plush pillows and soft blankets thrown carelessly over its surface; something that reminded us of the chaotic beauty of a studio of an artist. We spent so many times snuggling there; our excuses were the cold, the wind, the rain, and the little time we had. We were surrounded by bookshelf, spice rack, Amy Winehouse, and the faint hum of the world outside: the trams, the bikes, the planes, the still sound of the canals, the rustles of the leaves at the park nearby.

I came to love the park much more than I ever did when I was there—and I never thought that this was possible, since I had always loved parks with all my heart. When we were outdoors, we spent most of our times riding or walking through it on our way home or on our way to the museums; as it provided us with a lovely shortcut from the busy streets where bicycles whizzed by in incredible speed. We had a picnic when the sun was up: reading books, sharing a generous portion of French sausages and seaweed burgers, sitting leisurely overlooking the lake while talking about our future plans and the end of summer that would also mark the end of our time together.

Probably it was this: the realisation that the clock was ticking (or maybe it was the cold), that made us clutched to each other ever-so-tightly as we zigzagged on your bicycle under the city’s rainy evenings, humming some random songs that came to mind while the street lamps shone their damp lights on us like dim stars hanging low. Or kissed abruptly at the park; behind the supermarket alleys; at the coffee shop; in a bookstore; in front of a closed shop—its roof invested by spiders—as we sheltered ourselves from the hard rain;  or by the street-side of the museum complex—where a couple interrupted us to ask whether they were close to Louis Vuitton store.

We had cold mornings, cold afternoons, and cold evenings altogether—and I had no intention to go out on those days. I found solace on the couch, reading your 25th Hour, my feet stretched out on the coffee table, my upper body got buried underneath the soft blanket, while you were working all day and stopping every now and then only to make cappuccino, buy groceries for breakfast, prepare lunch, open a bottle of wine, cook dinner, or hug me in random intervals.

On the rare occasions when you managed to convince me to go out, we would savour food from exotic places with exotic smells of exotic spices before retreating to a beer place for some warmth and random conversations about everything we could think about. We would leave when it was late, and most of the times it had grown colder outside; and I would flinched as the chill hit my face when you opened the door.

When a girl told a guy that it-was-cold, she was simply asking to be hugged.

And you would give me a hug and rubbing my upper arms for a bit of extra heat as we ran to the bicycle, laughing and looking forward to the promises of warmth: that we needed only to brace ourselves against this cold for a little longer and home would welcome us in just a little while.

My initial memory of your place was the bookshelf.

I sinned from judging people based on the books they read, and as you prepared some drinks for me that afternoon, I stood in front of your bookshelf and browsed the titles lining up there only to find out that I had also read most of the books you had.

When you showed me the terrace—overlooking the artsy neighbourhood—I noticed a string of Tibetan prayer flags on the porch of one of your neighbours.

That evening we found ourselves enjoying a live Nepali classical music concert in a small cafe on a hipstery street. People had beers in their hands, nodding their heads to the beat of the tabla, and some were clapping their hands. Soon after, in the dark, we danced to the last song being played with a bunch of friendly Nepalis who had lived in your city for quite some time. We were all just a bunch of shadows moving in unison: people from faraway places with stories of romance and heartbreaks altogether. As the music wafted in the air, around us, the boundaries between friends and strangers disappear.

We jumped and clapped and swayed. And laughed—not because there was something particularly funny, but because we were simply happy. Probably that was the best kind of laughter after all.

There were things I didn’t tell you after we parted in front of the supermarket at the end of that cold summer, when we said goodbye as abruptly as we kissed the previous days:

About how I dragged my suitcase across the park to be at the other side of the city, and it was raining, and cold, and I was clutching to my phone for directions—but the screen got wet every five seconds or so, after a while I gave it up and pocketed it, couldn’t care less about finding the shortest route to get to where I should be.

About how the park was full of life despite the weather and about how when I got too tired of circling around with my blue suitcase, I sat on a park bench—the raindrops were falling over the hood of my parka jacket—and cupped my hands on my cheeks; both felt oddly cold.

About how I just sat there and for quite a while I thought I could smell the wet soil, the lake, the leaves, the grass, and the grey clouds above. And about how the thought of a warm bed, a cup of Chocomel, and Chinese takeout finally got me going.

Distance was a funny thing. We might have thought about it silently as we had our banana smoothie in the morning or our rooibos tea in the evening—though we didn’t really want to go further into it.

And the farthest distance is one that is not crossed. But it was you; not me; that had decided to cross the distance that day, and I was thankful that you did, that you braved it out, that you tried. Because if I was not afraid, I, too, would.

PrevWhy I’m Keeping My 100-List and What I’ve Crossed Off This Year.
On Why Our New Year’s Resolution Doesn’t (Really) Work, and How I Created Mine (in A Slightly Different Way)Next

What Role Would You Choose to Play?

A few days ago, while washing dishes, my mind went to one afternoon a long time ago, when I was still working full time. We were in one of our weekly team meetings at the office and we were talking about 'role'. We were asking each other, what role would we choose in the office, if that role had nothing to do with our job titles, tasks, or functions.
read more

What Would You Do Anyway?

2020 has challenged us in many ways, collectively. Some of us may have been ‘forced’ to spend more time with ourselves, more than ever. For some of us, this can also mean having to stay with things that don’t feel right, things that annoy us, scare us, tear our spirits down.
read more

I'm a published writer, a creative content consultant, and a stationery/blog designer based in Amsterdam, the Netherlands. In Indonesian, 'beradadisini' means being here. So, here I am!

These past few days, I've been looking forward to

I've had this book on my radar for quite some time

Today's reminder is a quote from Ann Patchett, "Ju

Playing around with gouache again; trying out the

After 2 days of snowstorm, the sun is peeking out

Playing with colors is so much fun, especially whe

Been taking long walks in the nature during weeken