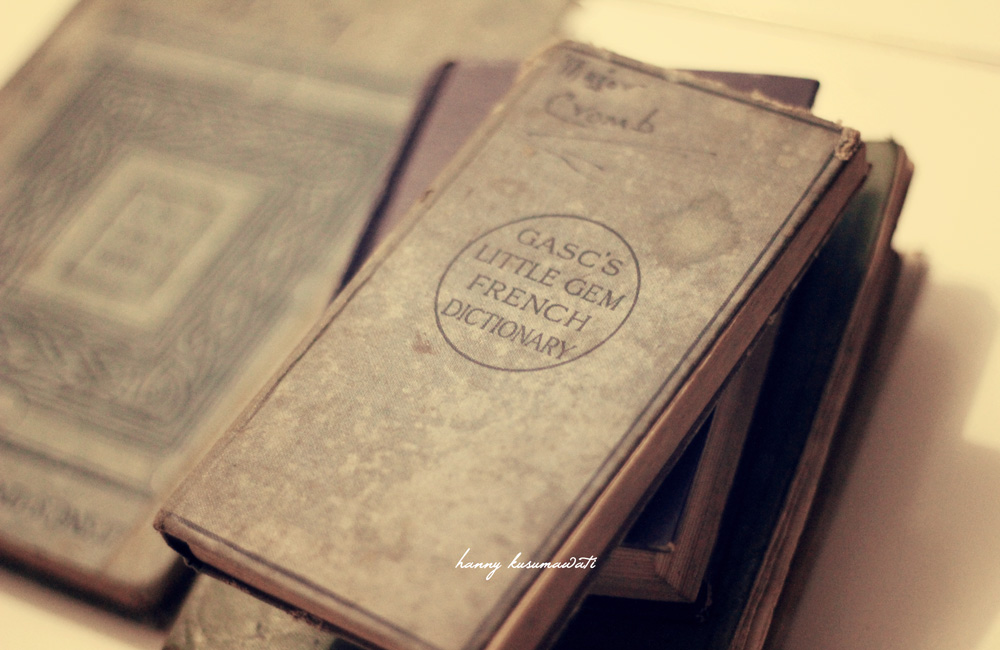 I know I am an old soul, and probably that’s one of the reasons why I am always drawn into anything vintage. Not to mention the fact that I can’t find the joy (yet) of reading books on my gadgets. I know it’s not that environmentally friendly, but I still love the real deal (would be better if it’s a second-hand book or a gift from someone): appreciating the cover, touching the edges, flipping the pages, reading the messages or underlined quotes someone had written inside… and don’t you think the smell of old books should have been bottled to be sold in supermarkets and sprayed in bookstores and libraries?

Thus, finding several old books from my grandfather’s collection was bliss! A beautiful French dictionary (love that pocket-size thing and it’s vintage blue stained-cover!), a small Thai dictionary & phrasebook, plus a Teach Yourself Chinese book! I know my grandfather (from my father’s side) loved books and that he spoke a little bit of Chinese and Dutch, but at the time he was still alive, I was still a little kid–and I didn’t know that he had this extensive interests towards learning foreign languages. 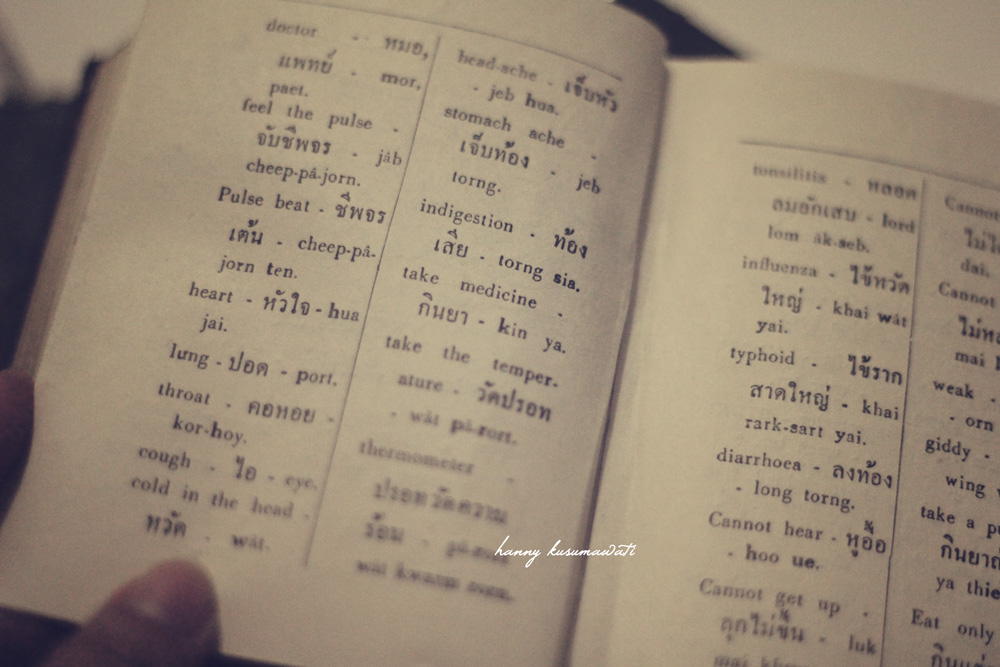 I glanced at my bookshelf where my phrasebooks were stacked neatly on top of each other. French. Greek. Arabic. Spanish. Hindi and Urdu. Russian. Wow. Now I know where my fascination for foreign languages originated from! I also found this holy treasure, Highroads of Literature (1927), and let out an excited shriek every time I looked at the beautiful paintings inside the pages–accompanying Tennyson’s The Lady of Shallot and Shakespeare’s The Tempest. 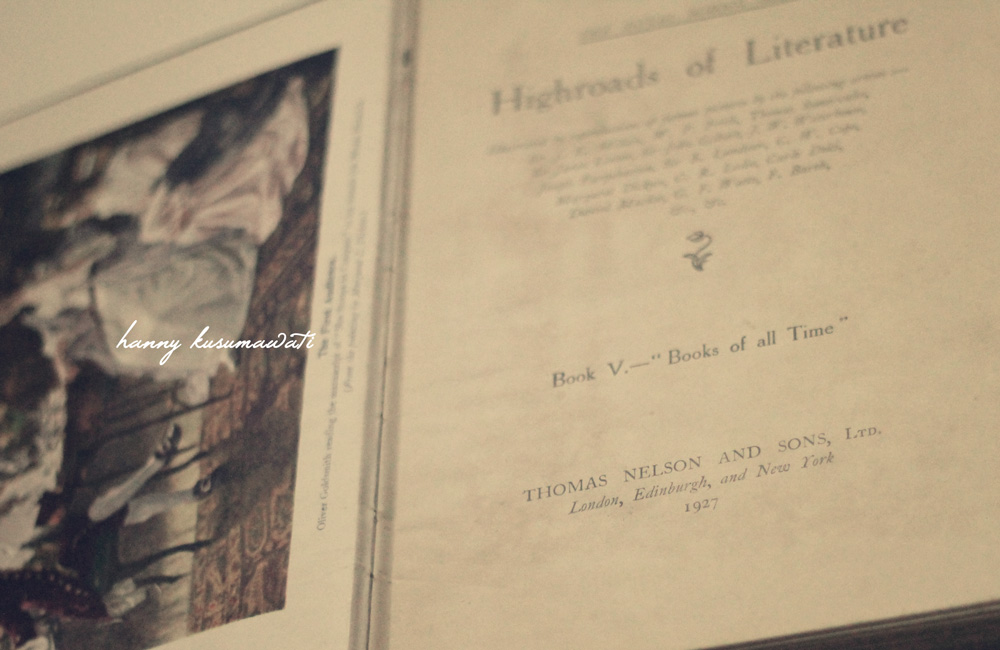 Another amazing finding was this Robinson Crusoe’s book because there’s a purple stamp from the bookstore where the book was bought… and it was pure bliss to find the word Buitenzorg stamped on it! Buitenzorg was the name given to my hometown, Bogor, during the Dutch colonial era. It meant something close to “a worry-free town”, where the summer residence of the Dutch East Indies Governor-General was located. This city of rain, which was surrounded by mountains, became a ‘resort’ town where the Dutch escaped from the bustling (then, and still bustling until today) Batavia (the Dutch name for the country’s capital, Jakarta). 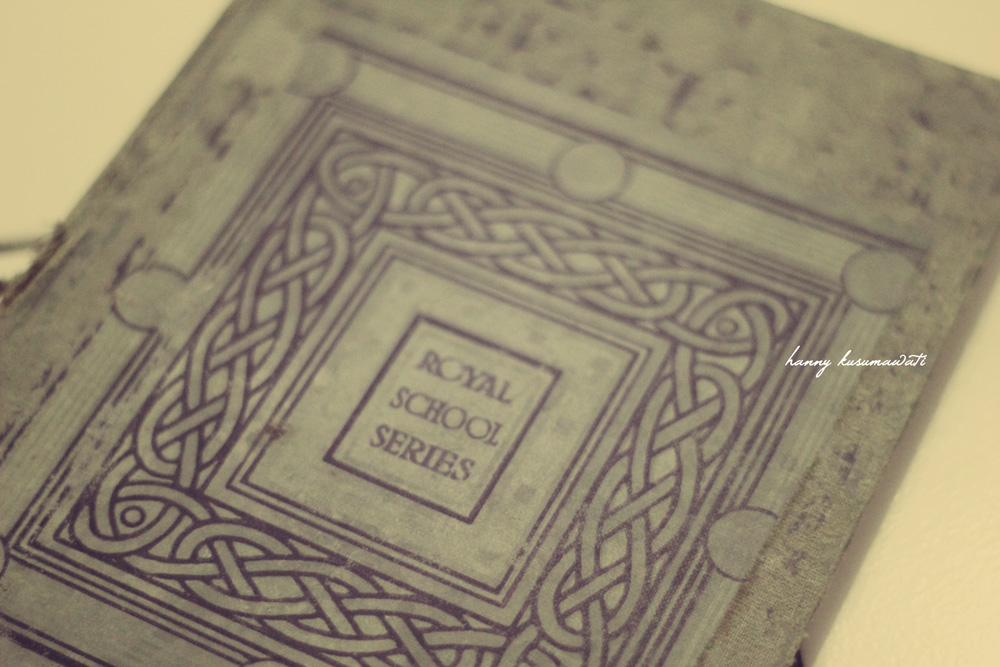 From my grandmother’s side, I actually bumped into this amazing thing: Madame Wong’s Chinese Cookbook. And look at those hand-written chicken-feet recipes on a piece of paper tucked inside the pages! Not to mention that the book has these beautifully breathtaking hand-drawing illustrations to show you the final look of the meals and the cooking steps–instead of photographs that you usually find in the modern cookbook! Have you ever found an old family ‘treasure’ lately?

PrevLife-lessons that are hidden behind a series of heartbreaks.
An Abnormally Perfect Fall.Next