Lost in Taipei: 2. The pursuit of hot springs 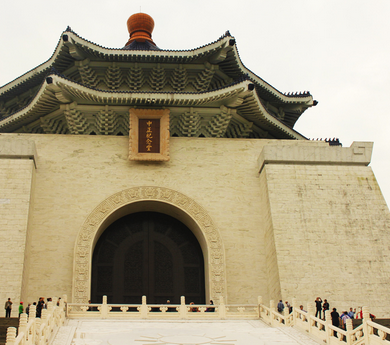 Taipei in the morning. The weather was nice. The sun was shining brightly—but the breeze was cool. Daud and I had to catch a flight back to Jakarta in the afternoon, so we got up very early in the morning to venture the city and be adventurous. Both of us had this urge of going to Chiufen—but as we consulted this option with the concierge, he said that it would make more sense if we went to Yangmingshan National Park and see the hot springs instead.

Our first destination was the Memorial Hall. The gate was very pretty. I felt like being thrown into an old movie all of a sudden. Several elderly local women were there, dancing. It was probably a routine practice or something. It was fun to see them dancing around cheerily while another grandma was sweeping and mopping the floor, her head was bobbing up and down following the beat. I wish I could still be such fun when I reach their ages, dancing around in the morning, laughing, being thankful for the good weather, good health, and good life! We spent an hour or so strolling around the complex of the memorial hall, helping a bunch of tourists taking pictures of themselves in front of the structures. One of the “tour leader” was this uncle from Penang, Malaysia—who handed us his name, address, and cellphone number, and asked us to call him up whenever we were in Penang, as he would gladly take us for a tour around town for free 🙂 From the memorial hall, we decided to go straight to Yangmingshan National Park, as we had only a few hours left. We took a cab and we had this gut feeling of how things would not be as smooth, when the taxi driver started to ask where in Yangmingshan we’d like to be dropped off. We had no idea. We kept saying “hot springs” and pointed to the image printed on our pathetic little map, but it seemed like none of this registered well to him. So, we decided to get off in front of what looked like a start of a hiking track, with a police station nearby. Maybe we could just ask for direction? Not really. A bunch of police stationed there were very friendly and very chatty, but they didn’t speak English much. We pointed at the image of the hot springs again, and they moved their hands indicating that it was still very very very faraway, and told us to just get onto a bus or a cab. There were no bus or cab in sight after we stood there on the street for around 20 minutes, so we decided to walk (and maybe, hike) a bit.

That was until we spotted this sign, and thought that maybe we could skip the hiking part? Our good luck started to kick in. A bus was coming. We hopped on, told the driver that we would like to go to the hot springs. Some exchange of words that none of us understood. And so the bus ride began. The driver kept glancing our way from one stop to another, like asking, “Kids, were are you heading actually?” — and so, for some reason, we got off at a stop that might be the right stop…

The official we met told us that we needed to wait for another bus to reach the hot springs. Again, he said, “It’s still so far faraway.”

Daud and I found ourselves sitting on a wooden bench on another bus stop—it was actually a very comfortable one, and the view of our surrounding was actually breathtaking. But our worries started to kick in, because we had spent around 2 hours in this complex and still couldn’t reach the hot springs. We didn’t know that the park would be this huge, and we had a flight to catch in 4 hours! We waited for almost an hour for another bus, and we thought that we would just drop the hot springs search and went back to the city. The bus finally came, we hopped in, and rode for 30 minutes or so, still we had not reached the city. The fog came down, enveloped us. Everything was white. We could not see our surroundings, we could only sense the bus turning left and right and left and right and after a few minutes of climbing up the hills, we felt that the bus descended to—hopefully, the city. The fog started to disappear, and as we glanced out of the window, we spotted the sign saying: hot springs!

We decided to check it out. After all, this was what we’d been searching for all day long! So we got off, walked a bit until we found a small inn, and asked for direction there— only to find out that… the hot springs were not public hot springs. There were small huts around these areas that people could rent, and they could enjoy the hot springs inside this hut, in the bathtub. Argh! Luckily, we could just phone a cab to pick us up at this inn and drove us back to the city just in time to catch our flight.

While Daud was waiting for the cab inside the inn’s restaurant, I wandered around the area happily, as the surroundings were so darn beautiful. The huts were amazingly serene as well. I could imagine myself staying there for a month or so, just to read and write and have a cup of green tea in the morning while enjoying the melodious chirping of the birds. And the area was full of butterflies… And look at this pretty thing! I guess, sometimes, it’s good to get lost.

PrevLost in Taipei: 1. A stroll in the evening
Dark and bright.Next