Lost in Taipei: 1. A stroll in the evening 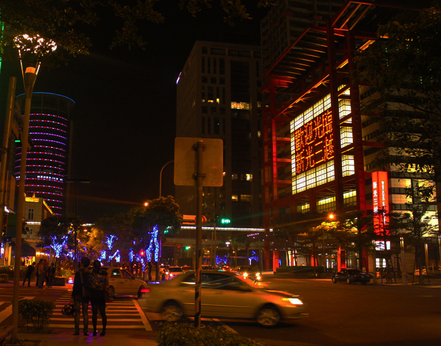 As I stepped out from the hotel that evening, it was pouring outside. I fetched my umbrella and waited for a cab, hopped in, and sat with my nose glued to the backseat’s window—capturing the beauty of raindrops and city lights. It was gorgeous. There were around ten of us that evening. Everybody had just met everybody else a few hours ago. Our Taiwanese friends brought us to this ‘hip’ mall in Xinyi District called ATT4FUN. They said there was a new Thai restaurant opening up, and we should try it because the food was so good. I know, I know, like we’re in Taipei and we’ll be eating Thai food? But, I was hungry. I needed rice. Thai food would do. The restaurant was called Bangkok Jam. And the food—yeah, it was so darn good, especially the spicy mango salad. Oh, and those chicken in pandan leaves! And the tom yam soup! And… well, apparently, I was really hungry (later on I realized that we have Bangkok Jam in Jakarta, too). My Taiwanese friend: “Would you like to try some Taiwan beer?”
Me: Sure, what does it called?
My friend: Taiwan beer.
Me: Like, the brand?
My friend: Yeah, exactly that.

And it was (literally) called Taiwan beer, indeed. It tastes like… a beer. A beer that you drink in Taipei. Okay, I know. I suck 😛 Taiwan in the evening. The occasional drizzle. The wide pavements. City lights. Such a good friend for those who would like to stroll around lazily, with nothing in mind. You could just sit on a clean and comfy bench when your feet got tired: sipping a cup of coffee from a carton cup, nibbling on some snacks, reading books, watching people. Suddenly, I felt Adele-ish. Being me, of course, the highlight of my Taipei journey was Eslite. Imagine a bookstore that opens for 24 hours, with 7 floors full of books, stationeries, and art & craft supplies. Heaven! You could see people reading there, sitting cross-legged on the carpeted floor. Some teenagers were occupying rows of wooden desks—studying solemnly. Wait. Was this a bookstore or a library? I found myself got overly excited and overwhelmed, surrounded by tall bookshelves lining up and books with wonderful covers from all around the world! I jumped excitedly from one section to another, flipping over some gorgeous-looking illustration books and gasped and sighed and gasped and sighed. It was just too much, that in the end I came out without buying any books. I know. I just… couldn’t make my choice in such a short period of time. I got only… 2 – 3 hours max? I mean, come on! *drenched in tears* Coffee should ease the pain. There was this cute Starbucks counter on the street—with cartoony poster in pastel colors. Taipei was full of cute stuff and drawings like that. Just mentioned it: billboards, road signs, city maps, advertisements, posters, brochures… probably watercolor artists and illustrators stood better chances of making a living in this part of the world.

The other evening, we had seen a display of an uber-cute artistic work at Taipei 101, the landmark of Taipei that used to be the tallest building in the world. Look at this Taipei 101 mascot, called “Damper Baby” (a 730-ton tuned mass damper that acts like a giant pendulum to counteract the building’s movement; reducing sway due to wind by 30 to 40 percent). Could you see that the mascot was actually designed out of the number 101? 😀 Riding the elevator up to the observatory on the 89th floor, I sat in front of a glass wall overlooking the city, covered in fog. The city lights were disappearing. Everything was gray and white and dark blue. The open-deck on the 91st floor was closed that day due to the bad weather and the strong wind. I treated myself a cup of green tea and sat on a bench, resting my feet; then took more pictures of me with the ever-popular Damper Baby. We actually looked alike. The night had fallen. The youths and the elders came out in couples, holding hands, landing light kisses on each others’ cheeks. Earlier that afternoon, a Taiwanese guy, D, mentioned about The Raid when he knew that we came from Indonesia. He said The Raid was one of the best action movie he had ever seen. The movie was definitely a big hit in Taipei, too. There was this one particular evening when I got into my hotel, dead-tired, and just went straight to the bathroom for a quick shower. As I finished up, I realized how beautiful it was: bathing with the city lights twinkling around you. And then it registered to me, way too late. Wait, why did I see these city lights from the tall buildings? Oh. The bathroom had these glass walls, and apparently, I forgot to close the curtain.