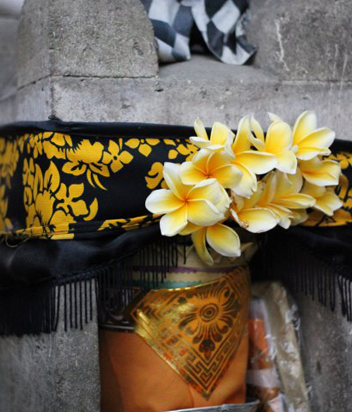 I woke up to rain. To the faint smell of pandan leaves and frangipani. The sky was dark gray. The garden were glistening under the downpour. I watched the mist floating silently in the air, astounded by its ghostly appearance. A dark and wet morning in Ubud for a bunch of depressed writers. A perfect gift. When the rain subsided to drizzles, we tip-toed to the breakfast area, to avoid stepping over the offerings (banten). Breakfast was served in a small hut next to the paddy field. The sound of Balinese gamelan, the hush of the wind, the rhythm of the raindrops, the spores of Actinomycetes. There were three of us at the table, but we did not talk much. I sipped my coffee without hurrying.

Leaving the cottage at around 10, we decided to take our separate ways. The guys went uphill, while I sat on the edge of the bridge, looking down to the mesmerizing beauty of Tjampuhan (Campuhan) river. I could spend hours just looking at the flowing water, orchestrated by the faint sounds of the birds and monkeys from the nearby forest. It was so calming, like a therapy to ignite a sense of melancholy. Joe Forgas, a social psychologist at the University of New South Wales in Australia, has spent the last decade investigating the link between negative moods and creativity. He has repeatedly demonstrated that a little melancholy sharpens the spotlight of attention, allowing us to become more observant and persistent. Forgas has found that states of sadness also correlate with better writing samples; subjects compose sentences that are clearer and more compelling. Because they were more attentive to what they were writing, they produced more refined prose, the words polished by their misery*.

That was probably the exact reason why the three of us decided to hide in Ubud for a few days. True, it was that time of the year when they held this annual International Ubud Writers & Readers Festival—where writers from all over the world came to this little dot on the map for a series of talks, readings, or workshops. But the festival was merely an added topping. The core ingredient of our #PecahdiUbud (“Bursting in Ubud“) journey was actually the one that Forgas mentioned.

We were looking for a place where we could savor the melancholy of being silently depressed and miserable. Ubud was just the perfect place to do this. A small village hidden beneath the lush canopy of green, with its forests, rivers, hills, temples, and October rain, far from the beach-side’s sunny celebrations. A bunch of traveling companions who could understand these shared state-of-sadness. Those who wouldn’t mind to sit together in silence—each one got lost in one’s own thoughts: racking our brains, scribbling some notes, typing stories, reading books, or gazing out into the emptiness. In the afternoon, after a long lunch, we would wander around listlessly—only to find ourselves took our separate ways, again. Adit went to a batik workshop, Ney went to a book discussion, and I decided to sit in a class of 15 people; clutching my Vernon God Little novel while the author, DBC Pierre, was sharing his writing experience right in front of me.

When the sadness and depression overwhelmed us, we left Ubud for Seminyak and walked under the sun until our feet got tired and our skin were burning hot. That day, we waited for the sun to set in Cafe Bali, Oberoi Street. Sat lazily on a huge couch overlooking the tiny pool and the Ganesha statue, we sipped our coffee and devoured six types of desserts to wash away the bitterness. As night fell, we climbed back up to Ubud: the wind was chilly, the air was damp, the sky was dark. A small sliver of the moon was hanging there, looking lonely. We walked past the darkness of the museum not far from our cottage, the sound of the night enveloped us. It was the museum of Antonio Blanco—a painter of Spanish and American decent who came to the island in 1952 and fell in love with Ni Ronji, a Balinese dancer, and got married to her a year later.

My mind was instantly filled with mythical creatures, kisses and fireworks, invisible inhabitants of the past and the future, the traces of unrequited love, explosion of tears. It was that time of the year. To celebrate sadness and misery, to welcome tears and despair, to get high just by looking at the words pouring from my computer screen. “Bursting in Ubud” was about embracing all these, to wake up again in a different morning one day and walk out with my golden slippers, sunglasses, shirts, and shorts—heading to the beach with a burst of laughter. *) p. 77, The Unconcealing, a chapter from the book “Imagine” by Jonah Lehrer.