Stranded in Almaty | 2. Going Around 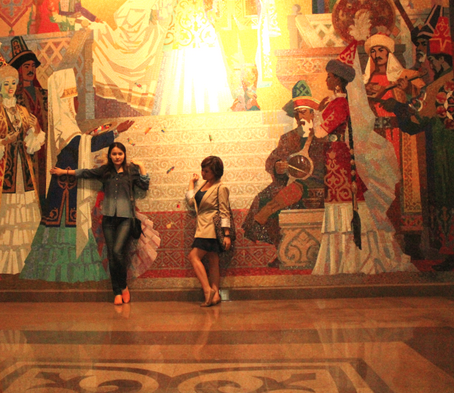 Almaty is a big city. How does one travel around in Almaty? Well, by bus. Or by metro (subway). Or by taxi. I didn’t get to experience the bus, but I adore the metro (subway). On the other hand, Almaty’s taxi story is amusing. Any cars in Almaty could function as a taxi. So, what you should do is to hail this ‘unofficial cab’ by lifting your hand in front of you as high as your waist. Don’t raise your hand too high if you’d like to do it like a local.

The next thing you should do is to bargain with the driver on where you’d like to go and how much you’d have to pay. Usually, if you’d like to travel anywhere inside the city, the cost is about 300-500 Kazakhstani Tenge (KZT). KZT 1000 worth around USD 7. Language barrier made it more difficult for me to take the taxi. First, I needed to communicate my destination. Second, I needed to bargain for the price. Third, my local Kazakh friends told me that I might be given a higher price because the driver would know that I was a tourist.

Thus, I retreated to the comfortable metro. Metro stations were located within walking distance from my hotel. The nearest one to Hotel Kazakhstan is Abai station. Almaty’s metro-stations are themed. They look like museums. Abai station, for instance, took the theme of the famous poet, Abai Kunanbaev. He was a poet, writer, public figure, founder of the modern Kazakh written literature, culture reformer in spirit of rapprochement with Russian and European culture on the basis of the educated liberal Islam.

Baikonur metro station looks like a space shuttle. Baikonur Cosmodrome is the launch complex where Sputnik 1, Earth’s first artificial satellite, was launched. The rocket that lifted Yuri Gagarin, the first human in orbit, was also launched from Baikonur. However, my favourite is Grand Theatre (Dramteatr im Auezova) metro station. It’s so pretty, with thousands of mosaic tiles forming a scene from a folktale. For one ride with the metro, you need to pay KZT 80 only. Very cheap! Finding out which station you should get off at or which side you should take (left or right—heading to this station or back at that station) might be a bit confusing. However, if you could read some of those Russian alphabets (I managed to grasp it in a few days), you’d find it easier and more convenient to ride on the metro. To reach the “hip area” where most bars/restaurants/clubs are located (like Barfly at Hotel Kazakhstan), or should you want to ride a cable car to KokTobe mountain, the stop is at Abai station. If you’d like to visit Almaty circus, the amusement park, the museum of art, get off at Grand Theatre (Dramteatr im Auezova). Hop off at Zhybek-Zholy if you’d like to visit Arbat—the artsy street of Almaty with its stretch of upscale restaurants/bars and branded shops or if you’re interested in visiting the famous Green Bazaar.

So, what did I do in Almaty in my remaining 5 days? I visited Zenkov Cathedral in Panfilov Park, rode the cable car to KokTobe, experienced Almaty’s traditional market at Green Bazaar, took a cab to Medeu (where the olympic-sized ice-skating stadium was located), strolled around Arbat, spent 5 hours to savour the amazing French painting & sculpture exhibition at Almaty’s Museum of Art, and fell sick.