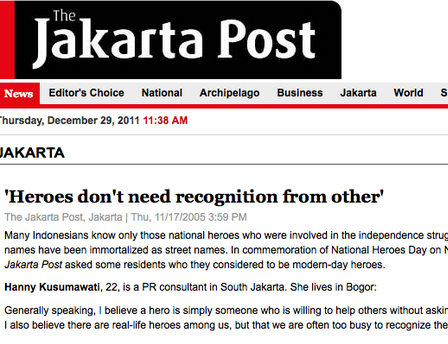 Today, I stumbled upon an article in The Jakarta Post from the year 2005. I was surprised when I spotted my name written in the article—at the time, I was still 22 😀 I didn’t even remember how it got there in the first place. I think it was a short interview for the commemoration of National Heroes Day, and the journalist asked around, trying to find out who people considered to be modern-day heroes. Below is my answer: Generally speaking, I believe a hero is simply someone who is willing to help others without asking for recognition. I also believe there are real-life heroes among us, but that we are often too busy to recognize them.

I once saw a street musician help a middle-aged woman who fell from a moving minivan. A vendor helped a friend of mine who fainted inside a train, and even found a car to take her home.

And a friend told me of her cousin who wanted to commit suicide, but changed her mind after hearing the song Heaven on the radio.

So I think a hero is someone who never considers himself a hero, and perhaps does not even realize they have done a heroic deed. Most of the time, a hero is simply a stranger who gives you a genuine smile and brightens your day.