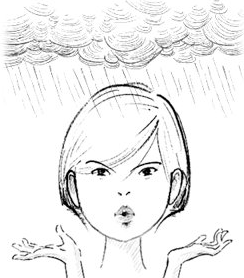 One cloudy morning, a friend of mine left a link to this short movie in my Twitter timeline. I opened the link and my eyes fell instantly to the movie description at the bottom. It said: Every day, so many opportunities to connect… what if you took just one? Even before I watched the movie I knew that it would bring some tears into my eyes. The what-if. The saddest word in the world.

A guy shyly stole a glance at a woman sitting across him on a train. When their eyes met, he pretended looking at another direction. When the woman got off at a station, the guy realized that she had left her pocket camera behind. He brought the camera home, and started looking at the images the woman had captured. From the shots he found out that apparently, the woman had just had a farewell party. She was going to move to another city. And how surprised he was, when he found several candid shots of himself, taken by the woman during the train-ride! Startled, he tried to find the woman. Following some clues in the woman’s pictures, he finally managed to locate the woman’s apartment—only to find out that the woman had gone.

I used to live with lots of what-ifs, especially when it comes to relationships. I was naturally shy—and back then, glancing a smile or saying hello to a guy was definitely not something I would do. Not to mention starting a conversation and exchanging contact details. I always thought that I wasn’t good enough, not attractive enough, not interesting enough. I was afraid of being rejected, afraid that I would humiliate myself. And because of that, I chose to live my life in numerous what-ifs, because it was a saver option. Because I didn’t have to hear ‘the painful truth’—and not knowing the painful truth means: I still had hopes. What didn’t register to me at that time was the fact that there were happy sides of truth! The kind of truth like that-guy-actually-liked-me-but-he-thought-I-was-not-interested.

We only lived once. And I was lucky that I could survive to 25 (and now 28), to find out about the truth; to discover the answer behind the what-ifs. But again, what if we only have today?

Things like being rejected or being humiliated don’t scare me as much these days. I know that the worst will pass, and the best sometimes appear only once. Lately, whenever I found a reason to connect, I decided to take the chance. Don’t get me wrong. I’m still shy 🙂 But recently, I met a guy that I found slightly attractive—and I, shyly, asked him to write down his contacts before we parted. I couldn’t believe that I actually did that, and I was surprised knowing how liberating it felt! 🙂 At the time, I thought: maybe I’ll lose interest in a week, maybe he’ll find me annoying, maybe I’ll never contact him again, maybe he won’t reply if I drop him a line or two…

But, came to think about it: who cares? We only live once, and it was great knowing that we have no regrets; that we don’t have to spend all our lives questioning: what if?