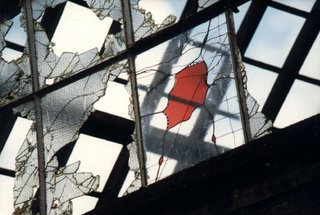 I started to think that though I have been trying so damn hard to deny it, the fact remains the same: I love him as much as I hate him; the fact that these follies drive me mad and eat up my sanity bit by bit. And I wonder if I could ever call it a quit.

I thought I have managed to get over him and all those cheesy feelings. But when I found out that he had left a message in my mailbox a few days ago, my heart beat fast. Suddenly the room turned colder, as well as my palms, and it was hard to breathe. It took no more than a sec before I completely turned into an airhead.

I was overflowed with this stupid utopia that he must have dropped some meaningful lines for me, and that he would really “talk” to me through this email—remembering that it had been years since our last chit-chat.

But, of course, as usual, my heart sank when I clicked the subject of his mail and those lines appeared on my iBook’s screen. It was a meaningless sentence; a slight “thank you” in a very formal tone, indicating that the reason he dropped the line was merely an act of courtesy.

It made me want to scream and curse. (I didn’t cry, my tears were already accustomed to a certain level of pain he caused—and this shit was nothing compared to what have happened years ago)

My friends started to think that I was obsessed, which might be true. But you just can’t find a getaway from you feelings, can you? It’s in your head and it becomes a part of you and you just can’t ditch this feelings no matter how hard you try. Crossed my mind that probably I should give Ms. Kassandra a call and asked her if she could help me with a hypnotherapy of some sort. Probably that will work.

Oh, this is so shallow! I’m in really deep shit. I’m sick. And I can easily laugh at myself at this very moment! I am nothing more than a shallow-minded person who places to much hope on such silly stuffs.

As I started to think that I should have just ended it all, I realized that it was impossible: because nothing has ever begun after all.