Ian Curley: A Message on Mindfulness from the Kitchen. 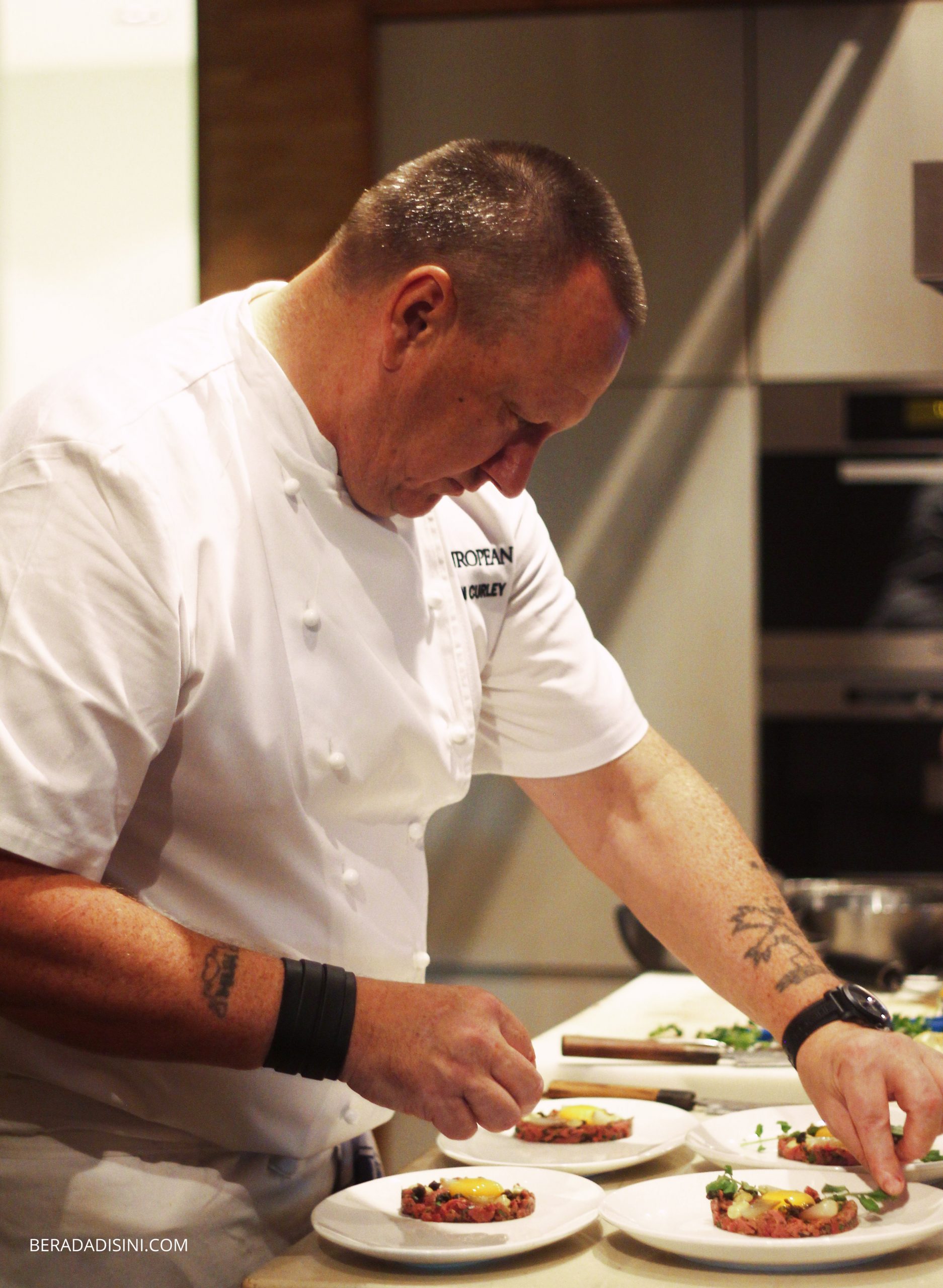 Maybe it’s true: that an end is merely a start for a new beginning. Or maybe, whether something is ‘an end’ or ‘a beginning’ largely depends on our perspective and the choices we make along the way.

When Ian Curley ran into trouble with the police in London back in the 80s; he could have think of it as The End. But Ian decided to see it as a chance to start a new beginning: he flew to Australia and started over. Today, Ian is considered one of Australia’s first-class chefs–appearing in the ever-popular Masterchef’s program, having his own reality TV show Conviction Kitchen, and preparing meals for Hollywood celebrities; from Beyoncé to the Kardashians.

It was a sunny afternoon. I had just finished savoring Ian’s delicious steak tartare–after watching him preparing this classic dish in the kitchen. But the leek salad, that came before the tartare, enabled me to see Ian in a different light.

“Leek is a very humble vegetable,” Ian said, as he put the leeks on the grill. “It’s easy for people to overlook this vegetable. It’s just a leek! What can you do with a leek? So they say. They know they can do much with meat, for instance. But leek? But leek is special, too. You just need to see it closer. If you really ‘see’ the vegetable–even if it’s ‘just’ a leek, you can always cook delicious meals with it.”

I watched Ian as he gracefully moved around the kitchen, laying out some plates on the kitchen counter and peeling the outer layer of a grilled leek that had turned dark brown. “Nothing should go to waste,” he smiled as he put the brownish peels on an empty bowl. “You can even use these peels to make leek powder. Just put them in the oven for a little while, and when they’re dry enough, you can crush them into a powder. It’s crunchy and tasty, and adds color and texture to your salad.”

This was when I realized the fact that I had just witnessing mindfulness taking place in the kitchen. Ian’s message is a message that translates not only to cooking but also to living. How often do we overlook the small things in our lives, taking things for granted, or wasting the things we already have? How often do we wish to have ‘some meat’ instead of ‘just a leek’–believing that we’d be happier that way?

“See. The ingredients do not compete on the plate. They just complement each other,” Ian smiled, as he prepared the leek salad on the plate–and sprinkled it with leek powder. “Here. Now, try this!” When I meet people I admire, I don’t ask them much about their success. I ask them about their failures, their hardships, their darkest days. I ask them about what happens when the lights go out and the curtains are closed. I guess it helps me to see people as human beings–with their ups and downs, plus and minuses. No matter who we are, we are all fighting our own struggles. It’s easy for us to be envious (or jealous) when it comes to seeing other people’s success. But will we be that easily envious (or jealous) if we only knew what they’ve had to go through to get there?

“I chose my career over my marriage,” Ian said as he tapped his glass with his fingers lightly. “I guess… it’s something that just happens. There will come a day when we have to face difficult choices in our lives, and we have to make a decision about it, and then live with it.”

I could see where this was coming from; especially after Ian mentioned that he couldn’t remember the last time he went traveling not for work. Even when we met in Jakarta, he was on a work tour together with Victorian Government Business Office.

“It’s hard, you know. It’s hard to really know people–or a country, when you arrive at the airport and someone with a fancy car is already there, waiting for you. And you are taken into a nice hotel, people treat you nicely,  you meet the press, and then you go to a really nice kitchen to cook, and then go back to the hotel. You don’t get to see the real things,” Ian shrugged his shoulders. “That’s why I like to connect with real people. When I’m back from my work tour, I go to my restaurant’s kitchen. And I feel sane again. There is my staff, they just want to work and make money and go home to their families. To them, I am not a celebrity chef. And I think this real interaction is what keeps me sane, what keeps me real, what keeps me grounded.”

“You know, when you are blessed with so many things in your life, you just have to give back,” said Ian. I smiled, knowing by heart that he was right. Before, Ian told me about his TV show, Conviction Kitchen, where he taught life skills to recent inmates. I wondered if this choice of working with inmates had something to do with his past in London–when he ran into trouble with the police.

This reminded me of a friend who ran away from his port-city life by the sea in Vladivostok; only to find himself being pulled in by other port cities and sea-related works in different parts of the world. Some of us are running away from an event (or a place) in our past, only to find out that we’re being reconnected again with it in different ways, at certain times in our lives. It’s like a calling–a missing link that helps us to understand the reason why we need to go through certain things in our lives; no matter how unpleasant they may be.

Ian runs his restaurant, European, in 161 Spring Street, Melbourne, and still travels all around the world–from time to time, from one kitchen to another.

PrevWhy I Write.
It’s Okay To Not Be Okay.Next