My Saturday with Mishka. 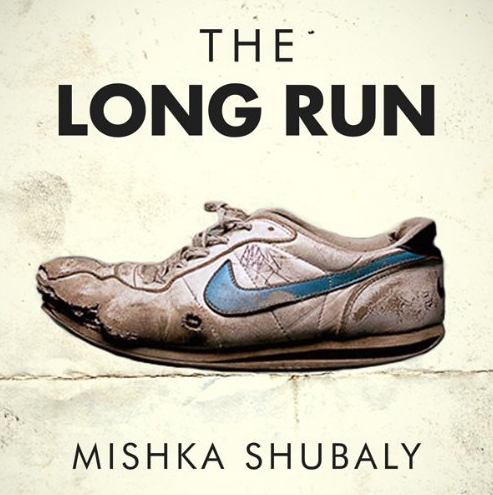 “The tragedy is not that you’re gonna die this way,” my mother had said to me once, “it’s that you live this way.”
[The Long Run by Mishka Shubaly.]

I fall for words. Words of all kinds. Flirty texts. Random questions. Stupid remarks. Silly emoticons. I fall for words so much, to the extent that I once agreed to meet a guy I had known online without even knowing how he actually looked like. He wrote nice emails and texts. That was all I know, and that was enough. Later on, he realized that he had not sent me his picture.

“What kind of girl agreed to go on a date with a guy she doesn’t know the look of?” he asked, laughing.

“An open-minded girl,” I replied. “And, anyway, who said that it was a date?”

So, we met over coffee one afternoon. And he turned out to be very pleasant and nice–just the way I pictured him through his words. We had a great conversation. And banters. And we laughed a lot. Oh, and as a bonus, he was actually quite handsome. Thus, don’t blame me if I continue to fall for words. My experience tells me that it’s 95% accurate.

So, yes. I judge people from the way they write (including the type of font they choose). I fall for their writing style, their choice of words, their inner voice, the way they place the right punctuation marks, as well as the wonderful feeling of reading those sentences out loud and thinking about how smart or funny or dark or interesting or intriguing the writer must be.

I also fall for Mishka Shubaly this way.

About a month ago, when I was browsing the Internet, I stumbled upon a mention of a writer I’ve never heard of before: Mishka Shubaly. I was intrigued by one particular article about him in Huffington Post, written by Cynthia Ellis. Cynthia’s words got me in an instant. Soon enough, I had been reading reviews about Mishka’s works all over the Net. Then I just knew by heart that I have to read them! Excited, I went to Amazon to purchase Mishka’s Kindle Singles–and devastated when a message appeared on my computer screen, stating that his works were not available for sale in my country.

Brokenhearted, I went to Twitter and told the world my sufferings, mentioning Mishka. I was so surprised when he sent me a direct message a while after! He didn’t know me. I was merely a stranger. But he was asking for my email address so that he could send me a draft of his story. I cried happily. I have learned many times in life, that you can get what you want if you only ask.

When The Long Run landed on my inbox, I cherished it like my secret treasure. Soon, I was immersed in the story of how Mishka climbed out from his ‘shit hole’–that was full of drugs and booze–and tried to ‘run’ his life back on track. I read the story 4 to 5 times in a row, slowly, tracing each word, each sentence, finding new details here and there every time. I read some parts out loud–and someone else’s life, more than 10,000 miles away from here, slipped from my lips. I fall in love with Mishka’s voice. The rising emotion as I delved further into the story. The way he sounded so bare and brutally honest, so strong and yet so vulnerable.

I’d never had to get through a breakup without that tireless listener, that bottomless well of comfort, that sympathetic devil: alcohol. I didn’t start drinking and I didn’t stop running, but I did start wearing sunglasses on my long runs, twenty-one miles over five bridges in Brooklyn, Manhattan and Queens, so the people I passed couldn’t tell that I was crying.
[The Long Run by Mishka Shubaly.]

The Long Run was a dark story. But Mishka didn’t inject depressing sobs as much as he laughed it all off–the way one should when looking back. The ability to laugh at ourselves is healthy. Because then we put ourselves not as a victim, but as a survivor. We’ve gone through that, we’ve passed, we’ve survived. Our past will always linger somewhere underneath our layers, but now it’s going to be more of a deep and reflective ha-ha story instead of a dreary suicidal tale.

The next few days after reading The Long Run, I was organizing my thoughts to shoot Mishka an email about his story and how it had affected me–both as a person and as a writer. But before I even had the chance to do so, I clicked the blue dot on my Twitter’s DM button one cloudy Saturday morning and found a message from Mishka.

“I can’t believe I’m talking to you right now,” I typed. “This is so effing absurd, but one of the coolest things ever!”

I was perched on a comfy couch in Casa, Kemang–my favorite place in town to read and write or have a lovely chat with my besties. That Saturday, it was raining heavily outside, and I was glued to my computer screen, talking to Mishka.

“One time, a cab driver told me. Everyone has to work, but you can choose who you are working for. I work for me. He was so right,” Mishka replied when I asked him what was the best advice he had ever received in life so far. “I started working for me, too. Toughest boss I’ve ever had! But I reap the rewards, not some fat old white man in a suit. Funny to get great life advice from a cab driver, huh? Or unsurprising. I often find that people working the front lines of humanity know the most.”

(I didn’t tell Mishka–yet, that one of my greatest life advice also came from a cab driver in Jakarta’s hellish traffic jam. But I’ll save that story for the next post)

“How does it feel to write something as… honest?” I asked Mishka. When I read The Long Run, I got nervous imagining how different people who were being featured in the story would react to it–and to him. “Do you struggle in the middle of writing it? Like how much should you put out and how much should you hold?”

“Writing the Kindle Singles is always exhausting,” said Mishka. “I try to write them like I’m writing a private diary that no one will see. Then, before I can stop myself, I send it to my editor. And then it goes out to the world and I have to deal with the consequences. It can cause me a lot of anxiety, heartache, worry… but the end result is worth it. I’d rather have people hate me for being honest than love me for being something I’m not. I’m a flawed human being with a lot of bad habits and foolish tendencies with lots of poor decisions and ugly shit in my past. I think that’s something a lot of people relate to.”

He was right (and it was funny he said that because a few days ago I had just written a piece about dealing with our pasts).

The Long Run is indeed a story about struggling with addiction–but it is more than that. Mishka’s addictions to drugs and alcohol is our addiction to a certain guy. To political power. To a branded bag. To be skinny. To a lighter skin-tone. To self-pity. To wealth. To the Internet. To an unresolved love affair. To a past.

We’re all dealing with our own addictions. We’re carrying these things inside, hiding it like a well-kept secret–so that no one will find out. Every day, we’re all trying to run away from something that anchors us down, and run towards the freedom to be who we truly are.

Humor is all a matter of perspective. You watch Homer Simpson hit his head and it’s funny, but when it happens to you, it’s supposed to be a tragedy? Nah, I think it’s funny either way.
[Mishka Shubaly.]

“We need to find a way so I can buy the rest of your stories,” I told Mishka. “I can pay through PayPal if you have a PayPal account.”

“Please just email me some popcorns as payment,” replied Mishka. And so, I did. PrevWe Are Made of Memories.
What’s the best piece of advice you have ever received?Next