One Day, When ‘We’ Disappeared. 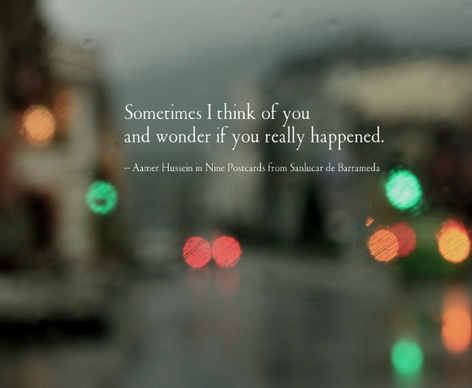 Because one day, “we” disappeared in front of a small alley on a small island, the two characters, W and E, being washed out by the drizzle. Suddenly, everything became discolored. Reasons were no longer exist. Things were losing meaning. Words were breaking into pieces. I lost my sense of being. And it was just like that; as simple as something that disappeared in silence one afternoon under the cloudy sky; just like all things temporary. But that’s the rule of life as we know it: everything will come to its end. It’s just a matter of how, and how long. And maybe, subconsciously, that’s what we’re doing: we’re all just waiting for something to end.

One day, when “we” disappeared, I found myself—and my heart (that had been broken many times but always refused to give up) embracing that familiar pang of sadness: of having to let go. No matter how often you experience such a thing, surprisingly, one is never immune to such pain. Of course, you know that you’ll be fine again—because your experiences have taught you so (been there, done that)—but still, you find it very tiring to begin again. I will definitely find it very tiring to begin again. And maybe, I won’t. Not now. Not so soon.

I know we love to begin something new (maybe this is the reason why we celebrate New Year with parties and drinks and fireworks and all things cheerful), but most of the times, we forget the art of loving an ending: to appreciate what we have got and what we have lost, to celebrate the memories and the traces of “us” that once were, to romance the things that stayed with us—that sooner or later will become us.

And so, that one day, when “we” disappeared, I knew that we’d find each other again. When we’re ready. When the time is right. And when the time comes, it’s going to be just me and you—no such thing as “we”—because in the end, I have left something in you and you have left something in me. And even when “we” disappeared, those things we’ve left behind with each other would remain to be a part of us. And isn’t that such a relief? To know that there is something eternal even in the most temporary things, that there is something precious even in the saddest of endings. And such knowledge, to me, is more than enough.

*) inspired by the title of Astrid Reza’s posting, “If Tomorrow We Disappear”.