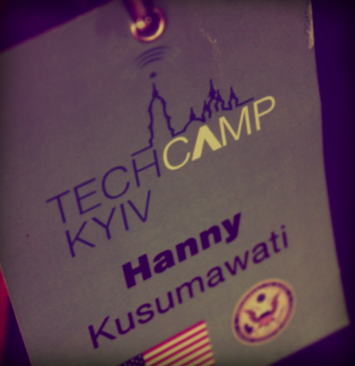 I survived my 6-hour stopover in Munich! It involved loads of writing on my black notebook, reading Nick Miller’s Isn’t It Pretty to Think So? for the second time, and of course: a few cups of coffee. It was bearable. As usual, I spent a fair amount of time watching people and making up stories about them in my head. I scribbled and looked up, scribbled and looked up… and I tried to sleep but I couldn’t.

Anyway, as a stopover-survivor, I reached Kyiv in the afternoon. The weather was good. It was actually the beginning of autumn, and they called it Indian summer: that time of the year when the leaves were about to turn yellow, the sun was warm and the breeze was cool, light rain fell occasionally, the temperature was about 20-25°C.

I was overly excited! Kyiv would be the beginning of my one-month traveling journey, and it started with TechCamp Kyiv—where I’d be meeting activists and youth leaders from Ukraine and Belarus, sharing stories and experiences about crowdfunding and fundraising for a cause.

And of course, it was always a pleasure to reunite with some familiar faces and friends, with Sam in particular. Being the sweet thing that she is, she gave me a gift from her favorite shop in Notting Hill: a jewelry box and a scented candle with the writings: Live Well. Love Much. Laugh Often. Dream Always. And I was wondering whether the universe was actually trying to speak to me.

Anyway, James came over just now and peeped into this and asked me to write “James rocks“. So, I did. You’ll meet James later on, in about two weeks I guess, according to the calendar (if everything goes as planned). I couldn’t write more with James pestering me, so… until then!

PS:  What’s so neat about all this is the fact that in the beginning of this journey, I didn’t even know that I would meet you, thus I didn’t know your name, yet. We’re still so faraway from meeting each other. Are we actually time-traveling?