The Wisdom of Pejeng: What To Do in Pejeng, Bali? 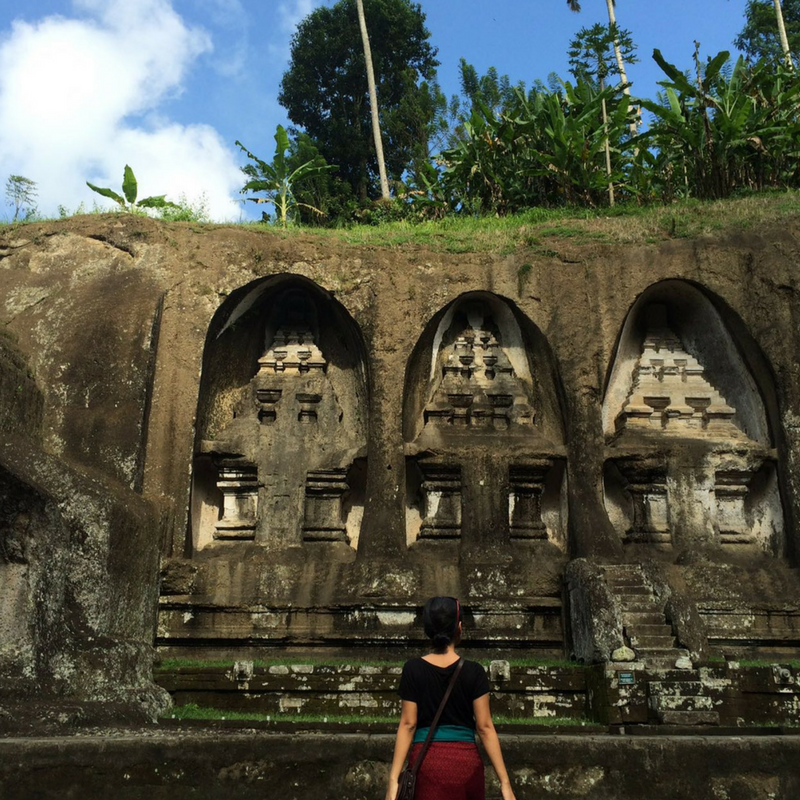 What to do in Pejeng, Bali? One way is to follow the trail of wisdom this beautiful village has to offer.

His was not a happy childhood.

He spent his first few days living inside Kerobokan jail when his parents got detained by the Dutch. His mother breastfed him on the cell and bestowed upon him the name Dewa Gede Badung.

His suicidal thoughts came before the age of 12.

Those were the times when he spent his days mindlessly at Garba Cave. Situated 400 meters above sea level, the cave lies underneath Pengukur-ukuran Temple, above the Pakerisan River in Pejeng village, Bali.

The Caretaker of Garba Cave, Pejeng

Now around the age of 70, he reminisced the days when (for reasons he could not truly comprehend) he got attracted to this hermitage site. As a child, he spent his time running around the cave as well as sitting still with his eyes shut tight. Something he understood later on as meditating.

It was during one of these ‘sittings’ he somehow heard a thought echoed in his head, loud and clear: a message not to end his life.

Thus began the days of new Dewa Gede Badung, as he decided to dedicate his life as a caretaker of Garba Cave in Banjar Sawa Gunung; where Prime Minister (Mahapatih) Kebo Iwa used to meditate back in the 12th century.

I met Dewa Gede Badung one afternoon when I visited Garba Cave. I was still hypnotized by the majestic look of my surroundings when shirtless, he shouted from the top of the huge stairs of stones, asking where I came from. His eyes were sharp, and his build was small but strong.

Easily, he lifted a huge piece of stone covering what to be believed as an underground tunnel of Tampaksiring. “Only those with a pure heart can find a way out of this tunnel,” he said. His eyes sparkling underneath the Pejeng sun.

On How One Should Meditate

I was amazed at how these words could sound so simple, yet so true. It’s not only about meditating, it’s also about living a good life.

One does not need too many things to live a good life.

We need only to eat enough so we can stay functioning and live a healthy life. It is not about indulging ourselves. It is about knowing what is good for us and our bodies.

We need to do our duty and play our part both in society and humanity; we need to serve. When we do so wholeheartedly, we will get what we need in return. Sometimes just enough, or sometimes even more. But we will not experience scarcity.

On How Nature Heals

David Strayer, a cognitive psychologist at the University of Utah found out that our brains are easily fatigued. There’s a full article in National Geographic on how nature helps us (and our brain) to heal; but all in all, when we slow down, stop the busywork, and take in beautiful natural surroundings, we feel restored.

And our mental performance improves too.

I guess it is for this reason that people take a break from work and go on a holiday to the beach, the lake, or the mountains. Or why I (many times) healed my broken heart by the rice fields in Ubud; or how I felt a strange sense of relief after such a tumultuous relationship just by spending hours sitting surrounded by the trees, birds, and squirrels of Delhi’s Qutb Minar.

The Healing Power of Water

For the Balinese, water has always been respected for its cleansing property. May it be flowing like a river, pouring down as rain, or sprouted from a spring—water is considered a holy element that brings forth life, and is mindfully preserved.

Every traditional procession and ceremony in Balinese villages included water or in Balinese, tirta, as one of its most essential elements. It represents a life-giving force, a purifying agent, a blessing.

One of the Balinese traditional purification ceremonies, melukat, resembled a river-bathing activity. A Balinese priest would lead a purification ceremony in a resplendent location at a confluence of rivers and waterfalls—where participants would undergo a series of rituals, including praying, bathing, and soaking themselves in a stream.

It was the day before the full moon when Yuni took me to Gunung Kawi, Tirta Empul, and Sebatu. Yuni works at Lanna’s Lair, a lovely villa in Banjar Sawa Gunung, Pejeng, a perfect place to wind down, heal, and get reconnected with yourself.

“These places would be full because tomorrow is a full moon. Everyone is going for the water purification ceremony there,” said Yuni, as she bought banten (offerings) and incense from one of the stalls lining up towards the melukat site.

The first thing I noticed about these sites was how beautiful their surroundings were. All those greeneries, the faint chirping of the birds, the sounds of splashing water… no wonder such places are believed to have healing powers. Just by standing there in silence and absorbing their beauty, I could have felt a wave of peacefulness washing all over me already.

Sebatu turned out to be the most challenging site of the day. One must climb down hundreds of steep sets of stairs to the holy spring, but the stunning view and the lush canopy of green above my head gave me the fuel to keep going.

I have always thought of Pejeng as a small village with nothing but rice fields and natural surroundings. So I was surprised at how many things I could actually do in Pejeng during my stay there. The village and the area nearby are swarming with historical sites!

Apart from Garba Cave, Gunung Kawi, Goa Gajah (or Elephant Cave, a Buddhist sanctuary built in the 9th century), as well as Tirta Empul and Sebatu holy springs, Tampaksiring Palace is located only 20-minute away. Sacred temples like Pengukur-ukuran, Penataran Sasih, Kebo Edan, Samuan Tiga, or Pusering Jagat are placed only a few kilometers away from each other.

“We believe that The Moon would make a sound as a sign that a catastrophic event would take place,” said Dewa Gede Badung. He remembered how The Moon was last heard made a sound in 1965, before the Indonesian grim massacres.

Pusering Jagat temple, on the other hand, is believed to be the center of the old Pejeng Kingdom. The temple attracted devotees who are wishing for fertility and seeking healing powers.

Pejeng would still be my secret village to wind down from the hustle and bustle of Ubud. It was always lovely to talk with the villagers and holy site’s caretakers–listening to the way they embrace ancient wisdom and making meanings out of it in such a modernized world.

As I floated along Lanna’s Lair pool overlooking the jungle, suddenly I felt so insignificantly small. As if I was surrounded by something way much older, way much more ancient, and way much more sacred than all the world’s history I’ve ever known.

What to do in Pejeng

Ask the lovely local staff at Lanna’s Lair to arrange a private cooking class (their Chef used to work in Ubud’s most well-known fine dining restaurant), a melukat trip or other Balinese traditional healing experience, meeting village elders and caretakers, meditation class (including their routine full-moon meditation), bicycle trip around Pejeng’s historical temples and healing sites, and many more!

Prev10 Years of Blogging and Being Here.
To You: Whom They Called A Strong WomanNext