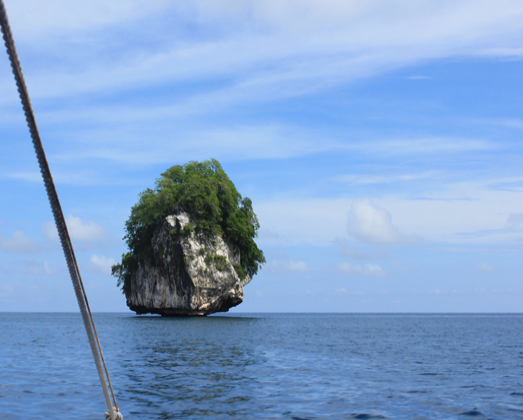 The next morning, I was on a boat for El Nido’s famous island-hopping tour. I was sharing the boat with two couples on their first and second honeymoon. One of them is Belle and Michael, who had just got married a few days before. Their love story was just amazing: from best friends to husband and wife :’) Island-hopping is a must in El Nido. What’s great is that the local authority have managed to regulate the price for such tours (tour A, B, C and D) so you won’t be ripped off. The authority have also decided on the islands we can visit (Turtle Island, for instance, where turtles lay their eggs, is closed for public. Only researchers can land on this island after obtaining a permit). When you pay for the tour, included in the price is the boat, guides, lunch, and snorkeling gears. And snorkeling is also a must, because the underwater view is just amazing! The clear water and the fish and the colorful corals… breath-taking! And don’t worry if you can’t swim (or too lazy to swim). You’ll have a life vest, so you can just float lazily there. If you don’t know how to snorkel, the guide will teach you how. There are two lagoons included in the tour (small lagoon and big lagoon). To reach these lagoons, you need to swim through an opening between the cliffs, because the boat could not get in. But if you can’t swim, the guides will help you to get there. No worries. Traveling alone? The guides will take your camera and put it inside their waterproof bag, and will take pictures for you during the trip (good pictures, too!). I love the guides! And they prepared our lunch-by-the-beach, too! ^^ What’s better than enjoying lunch accompanied by such a beautiful view (and a cute dog)? It was during lunch when I met Mischa and Julia and some of their friends. They were about to take a group photo by placing their camera on a rock. And because I overheard them speaking in Russian, I greeted them and offered them some help. We ended up conversing in Russian (well, perfect Russian on their side because they came from Moscow and could not speak English; and broken Russian on my side) and took turns taking pictures of each other. Matinloc Shrine was amazing. It was located in a small island, surrounded by the forests and the cliffs. It was also known as Shrine of Our Lady of Matinloc or Shrine of the Blessed Virgin). The view from the top of the cliff were just awesome; it was worth climbing. And it won’t be complete without lazying on the beach, waiting for the sun to set, and drinking young coconut water (buko in Tagalog) before heading back to town. The photographs tell it all 🙂

What Role Would You Choose to Play?

A few days ago, while washing dishes, my mind went to one afternoon a long time ago, when I was still working full time. We were in one of our weekly team meetings at the office and we were talking about 'role'. We were asking each other, what role would we choose in the office, if that role had nothing to do with our job titles, tasks, or functions.
read more

What Would You Do Anyway?

2020 has challenged us in many ways, collectively. Some of us may have been ‘forced’ to spend more time with ourselves, more than ever. For some of us, this can also mean having to stay with things that don’t feel right, things that annoy us, scare us, tear our spirits down.
read more

I'm a published writer, a creative content consultant, and a stationery/blog designer based in Amsterdam, the Netherlands. In Indonesian, 'beradadisini' means being here. So, here I am!

These past few days, I've been looking forward to

I've had this book on my radar for quite some time

Today's reminder is a quote from Ann Patchett, "Ju

Playing around with gouache again; trying out the

After 2 days of snowstorm, the sun is peeking out

Playing with colors is so much fun, especially whe

Been taking long walks in the nature during weeken